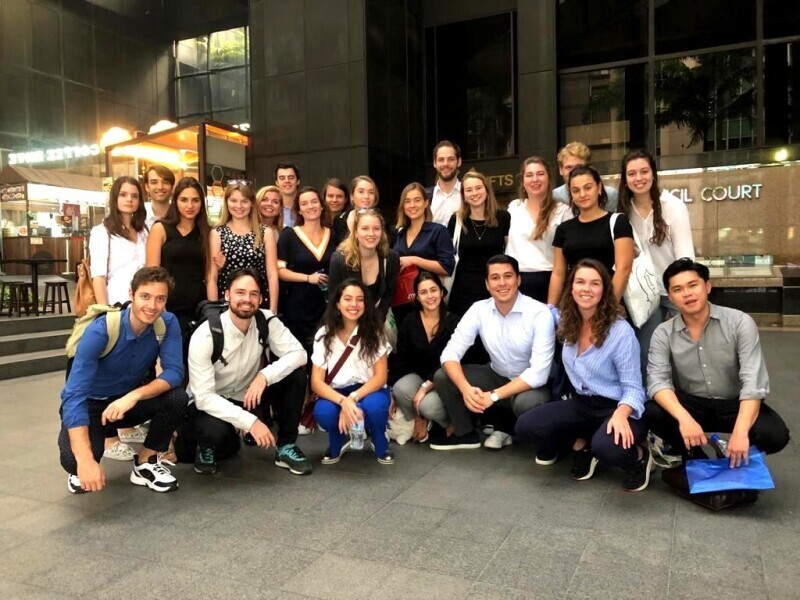 After almost a year of preparations, the day was finally there: on the 26th of October, we took off to Singapore for the International Study Project 2019. Most of our group, consisting of 24 final year bachelor’s or master’s students, came fresh out of exam week so everyone was extra excited for a week away.

The morning of our arrival in Singapore we dived head-first into what proved to be the most physically demanding activity of the week: the TreeTop Walk. This hiking trail lead us through some of the original Southeast-Asian rainforest, with a suspension bridge right above the treetops as its highlight. Some of the group accidentally took the 15km route, while others walked a much more doable 7km. Still, the heat, humidity and sleep deprivation from the flight got to most of us - after dropping our luggage in the apartment and getting the first taste of Singaporean cuisine, most had a (relatively) early night.

On Monday we had another day to get settled, as it was the Hindu holiday of Deepavali which meant most offices were closed. The extra day off was very welcome, especially for those of us who still had to catch up with the new time zone. Some decided to do some shopping on Orchard Road: a 2.2 km long complex of malls, with all ranges of shops you can imagine. Others visited the Marina Bay area and its sights: the ArtScience Museum, the Marina Bay Mall or the famous Marina Bay Sands hotel with its iconic rooftop.

Tuesday it was finally time for our first company visit: msg global, a SAP software developer. We spent the afternoon at their downtown office, where the manager of the Asia-Pacific region told us all about how msg applies machine learning techniques in their field. Afterwards, we were treated to some snacks and drinks and then we went on our way to the Gardens by the Bay. The Gardens is a huge nature park in the heart of Singapore, spanning 250 acres of land that was previously sea. We started our evening visiting the Flower Dome (the world’s largest glass greenhouse) and the Cloud Forest, two indoors conservatories with an enormous collection of rare plants and flowers. After that we made our way back outside to the Supertree Grove where we watched the light show.

The next morning was our earliest one, as we had to leave for a guided tour of Little India around 9 o’clock. Our very cheerful tour guide Bas showed us around the colourful neighbourhood for two hours. The sights along the way included the temple of Sri Veeramakaliamman and the brightly painted shop house of Tan Teng Niah. We finished our tour near the lively Tekka Centre, where some of us got a tasty bite to eat.

Then it was time to visit Factset, a financial data analyst. We were welcomed by one of their Dutch employees who has worked in Singapore for seven years. He told us about the differences between working culture in the Netherlands and Singapore. One of the things we learned: Singaporeans are not as direct as we are and would never want to embarrass themselves or anyone else. This means that often colleagues or clients will be hesitant to ask questions during a meeting and would rather do so afterwards through email. After the talk about working culture, another Factset data analyst presented some of the methods and models that Factset uses. She also explained how she passes on the results from these models to clients. With all the econometrics students in our group, this afternoon was perfectly suited to our interests. Following the presentations, the Factset team brought us along to a rooftop bar where we had some drinks and snacks. Afterwards, we dropped by some other bars as well and had a great evening with the group.

The next day we had a day off. Many went to one of Sentosa Island’s beaches, so that on Friday we were well rested and ready for the final company: Adyen. We had visited Adyen in their Amsterdam office as well, where we got to know their business activities and pretty casual working culture. Upon arrival we quickly discovered that some of that Dutch casualness was brought over to the Singapore office as well – it had a very friendly and relaxed vibe. At Adyen we worked on a real-life case, which asked the question which market to expand to next in Southeast Asia. The winning team received some Singapore souvenirs to take home. After the case we stayed for a chat and a drink with some Adyen employees before going on our way. The evening continued in the vibrant neighbourhood of Kampong Glam. We had a very tasty and fun group dinner at an Indian restaurant, although levels of spiciness were a bit different than what some of us were used to. Afterwards we made our way back to the city centre, where we spent the remainder of the evening at the world’s highest open-air bar, 1 Altitude. The view from the 63-storey high rooftop was amazing and everyone thoroughly enjoyed themselves.

On Saturday we had one final day to relax in the city before flying back home on Sunday. We had a great week exploring Singapore – the business as well as the touristy side of the city. Sometimes we mixed in with locals at one of the many hawker centres (food courts with the absolute tastiest food from all over Asia), other times we spent seeing the typical sights such as the Gardens or the rooftop bars. All in all, we learned a lot about what work and life in Singapore are like during this year’s edition of the International Study Project.